The BBC Pandemic app was a key asset BBC 4, 360 Production and scientists from the University of Cambridge and the London School of Hygiene & Tropical Medicine used to help with a groundbreaking nationwide study on how a deadly flu virus would spread around the United Kingdom. 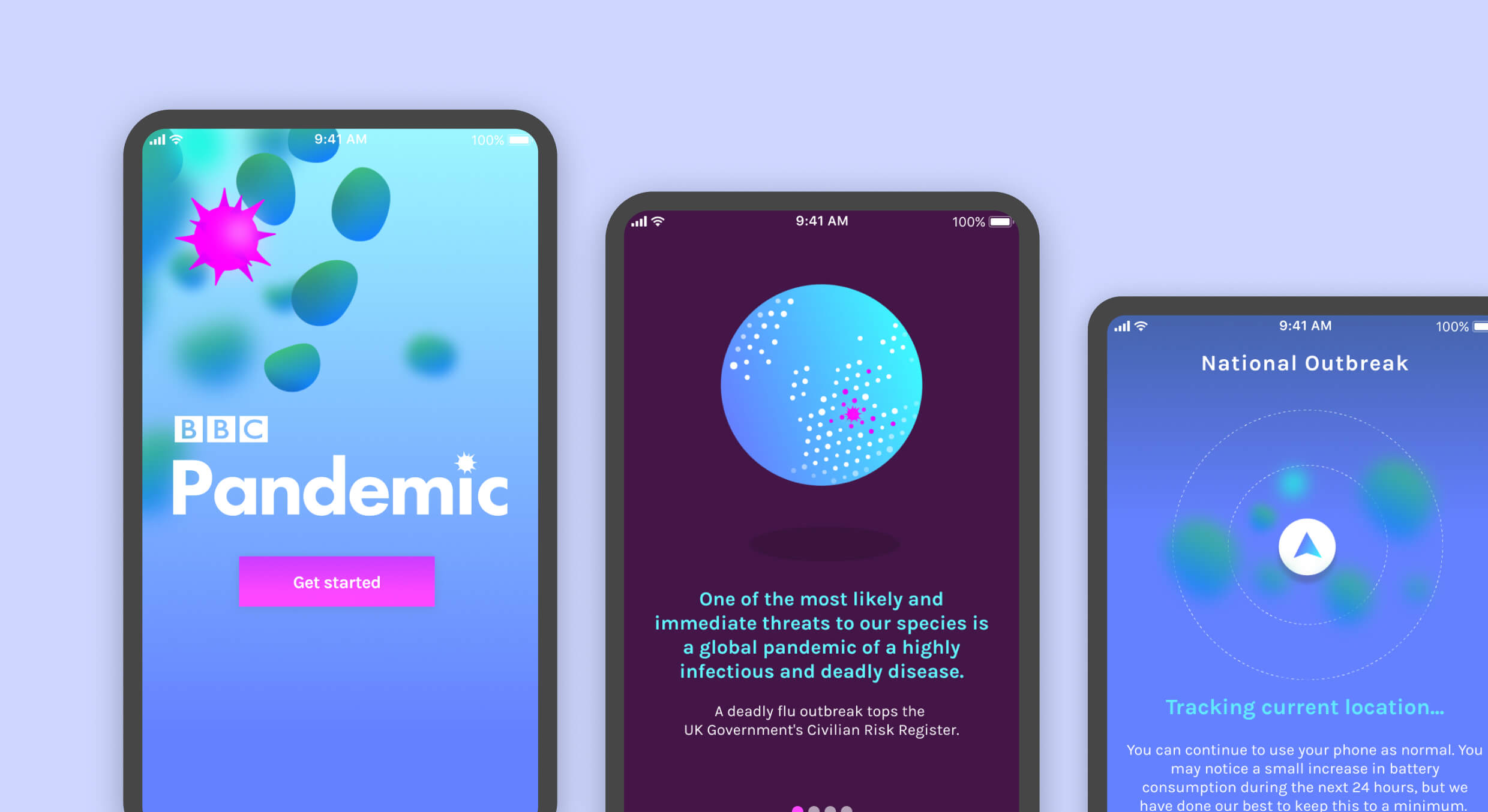 The BBC Pandemic application was a key asset BBC 4, 360 Production and scientists from the University of Cambridge and the London School of Hygiene & Tropical Medicine used to help with a groundbreaking nationwide study on how a deadly flu virus would spread around the United Kingdom.

At Big Motive, we were asked to design and develop an application that would simulate a spread of a flu virus around the United Kingdom. A localised study also took place in Haslemere. The app itself would track willing participants movement and also ask them for general information in relation to people they would meet during the study. The information would then be visualised to show the spread of the virus and notify users on whether they were infected or not. The final outcomes of the study were then to be used in the BBC4 television show Contagion! The BBC Four Pandemic.

I worked closely with other team members who were involved with early research and brand asset generation. I was then responsible for initial iterations of the information architecture (including user journeys and wireframes) and the UI design of the app itself.

We worked closely with the University of Cambridge scientists to fully understand the requirements of the application and to determine the primary users. To ensure the study was to be a success we needed to ensure the app was as accessible as possible to as wide a range of users as possible. We made sure to involve potential users from the outset by asking and listening to what they would feel comfortable using.

Data protection and privacy was a common concern for the users we questioned, as was battery consumption when the app was in use. Taking the users concerns into consideration and understanding the requirements of the app from the scientists perspective we had the information necessary to begin designing the information architecture beginning with early iterations of the primary user journeys. 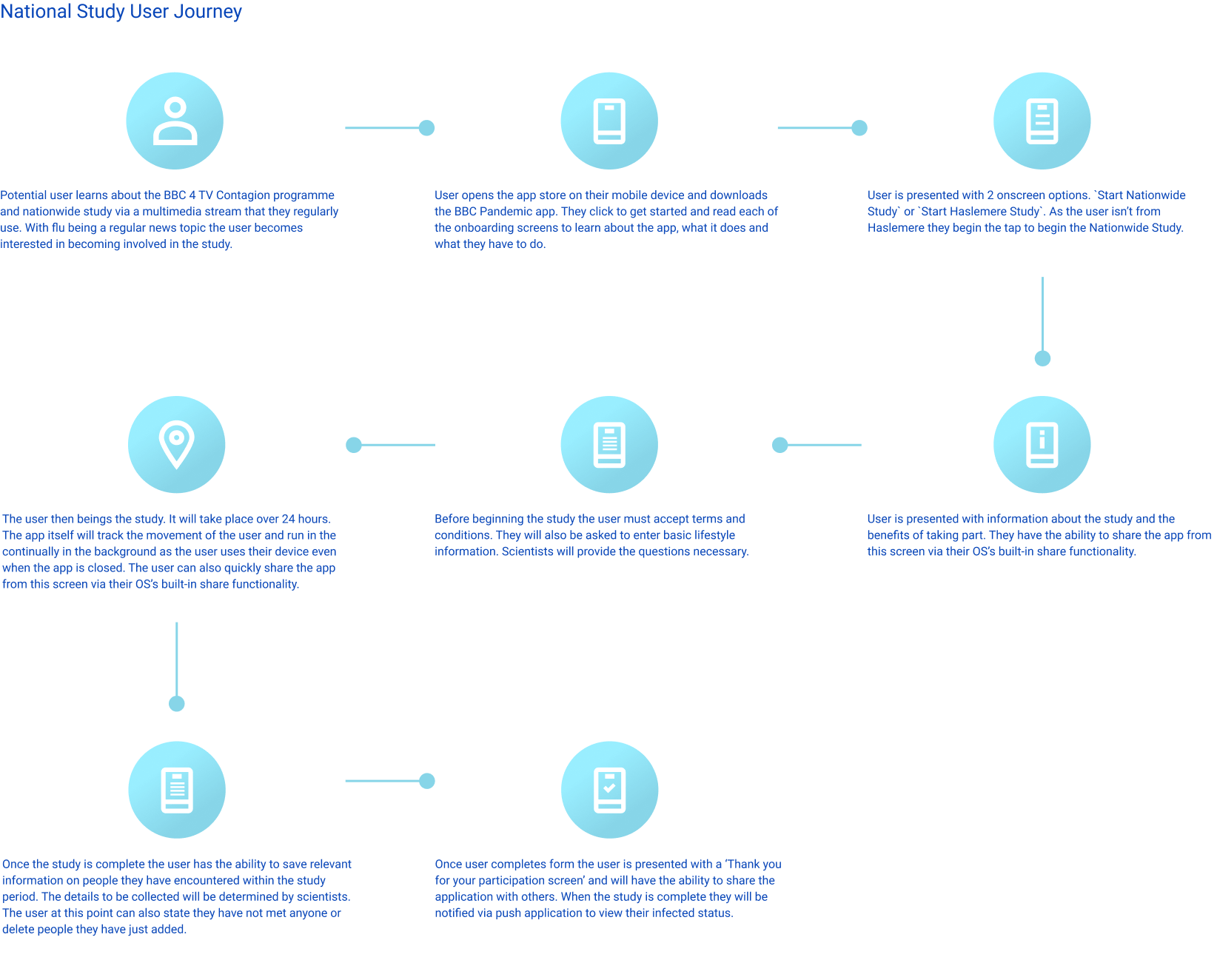 The app had to be as frictionless as possible to ensure users could progress through to their preferred studies as quickly as possible. User on-boarding was key so that users would quickly understand what they were going to be taking part in and what the application was going to do. Terms and conditions also had to be prevalent to ensure that all users questions regarding privacy were answered early in app setup. The key outcome of the app itself was to tell the user if they were infected or not after the study as well as provide the scientists with relevant study information.

We reviewed the primary user journeys internally and then shared with the scientists to gain further feedback on any further requirements to ensure the study data was as accurate and relevant as possible. As we received content from 360 Production I was able to move onto the wireframe design of each of screens using paper sketches to begin with before moving into Figma. 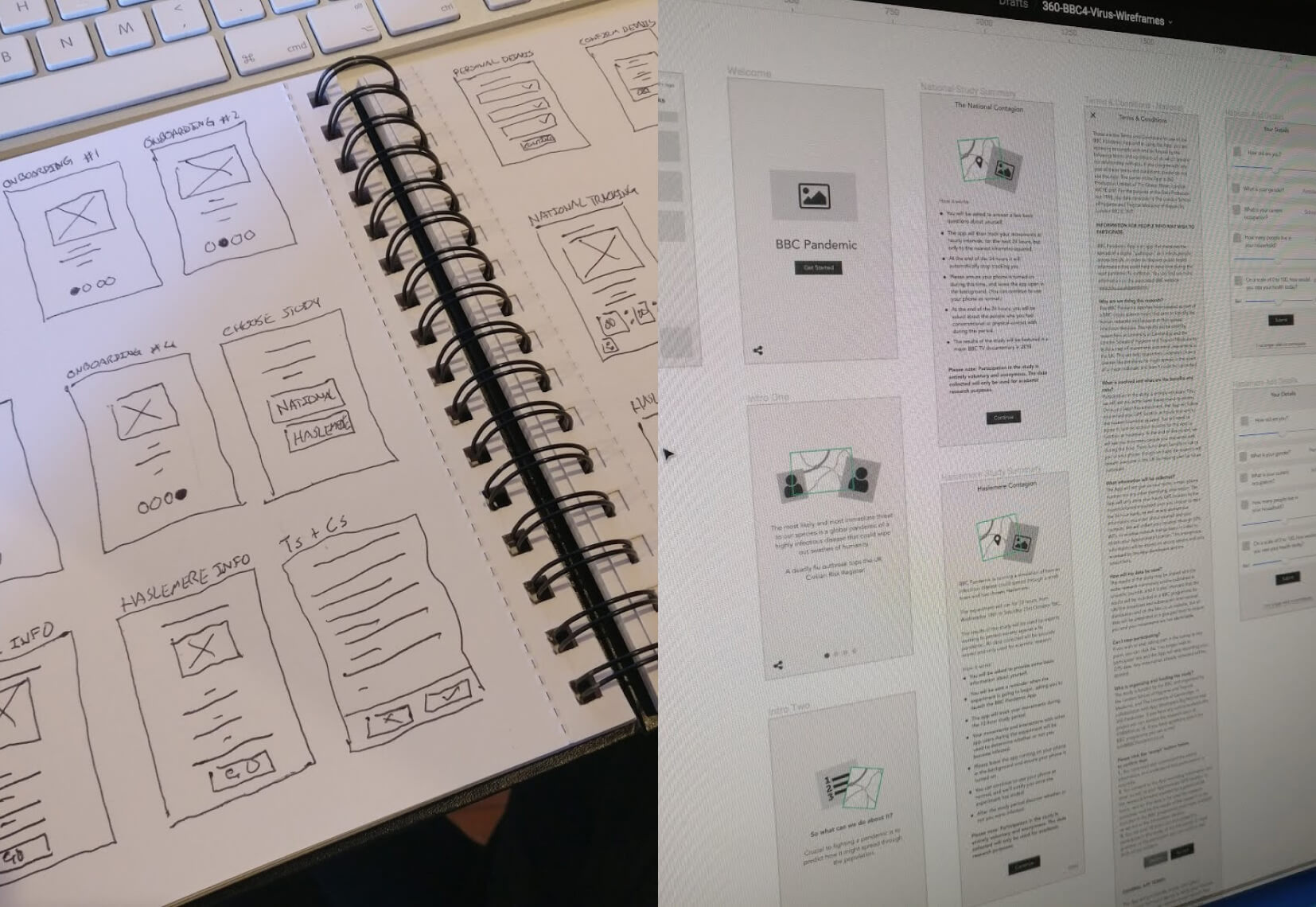 With sign off on the key user journey, wireframes of the key screens for the application began to be designed. Constant internal updates based on feedback from client and potential users allowed for many iterations of the wireframes. The content was continually updated as terms had to be precise to ensure the app fully complied with all current privacy laws. Sharing was an important functionality to include, as the success of the app depended on the interaction of as many people as possible.

Using Figma for wireframes design allowed for quick feedback from our team and the client. Using InVision in unison allowed for quick prototypes to show how the app would work and allowed us to quickly test with users and get vital feedback. 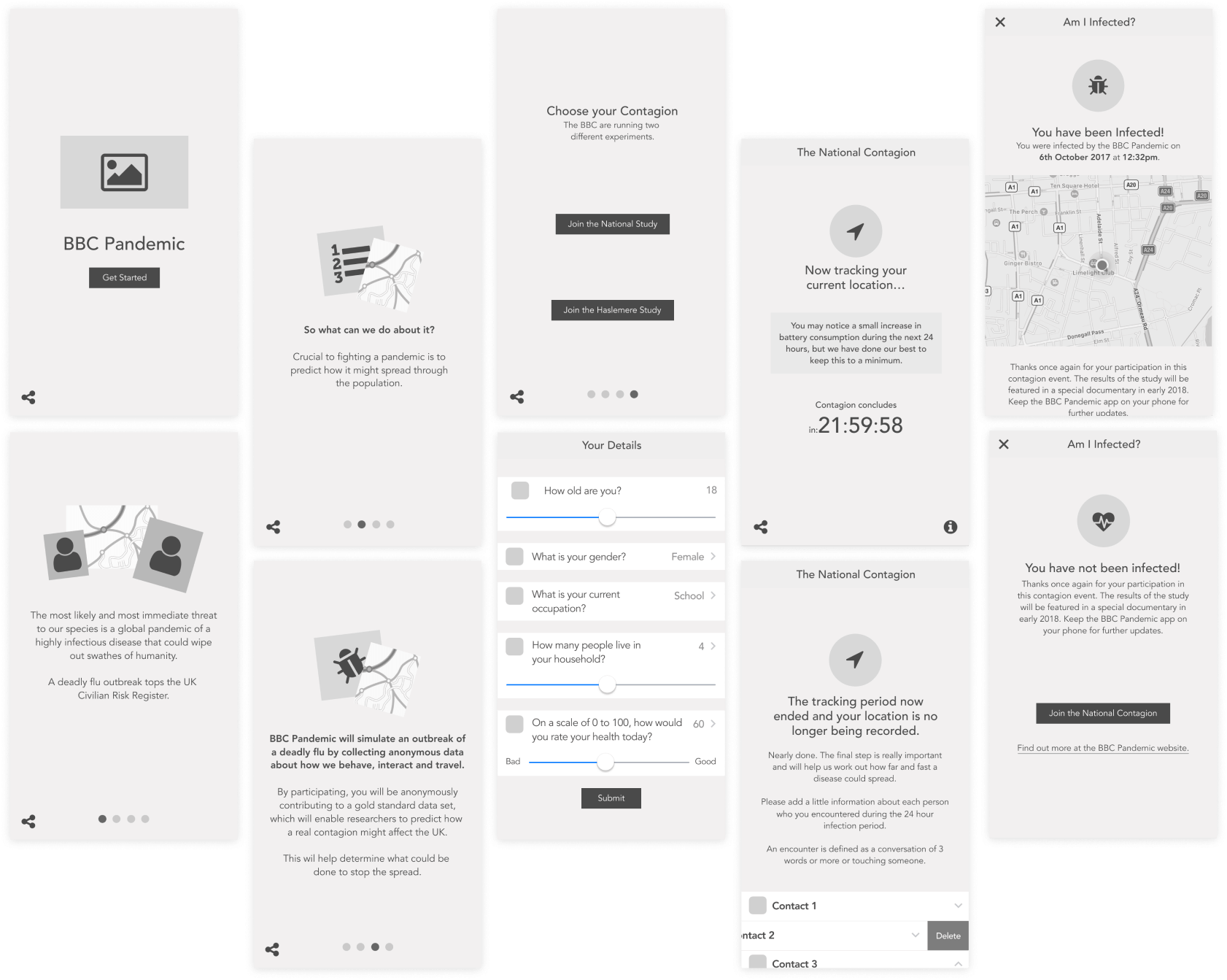 Based on feedback necessary changes would be made before getting final sign off. The importance of how the app was to work to get the best results for the study was vital and this led to many changes to content as the design continued to be fleshed out. Once the content was finalised we were able to start to apply design to the UI.

Our focus was to create an application UI that helped convey to users the purpose of the app and also ensure that the app itself was visually interesting and easy to use. The app has basic user functionality with form fields included to collect relevant user study information and timers showing the progress of studies. It was important that form screens and landing screens caught the eye and were easy to use and read for users.

Creating a collection of mood boards at the outset gave us an understanding and visual idea that we felt could work with the current brand assets. I was responsible to begin to create the UI and ensure a constant feedback loop between our internal team, the client and potential users was in place so that required changes could be made where necessary. 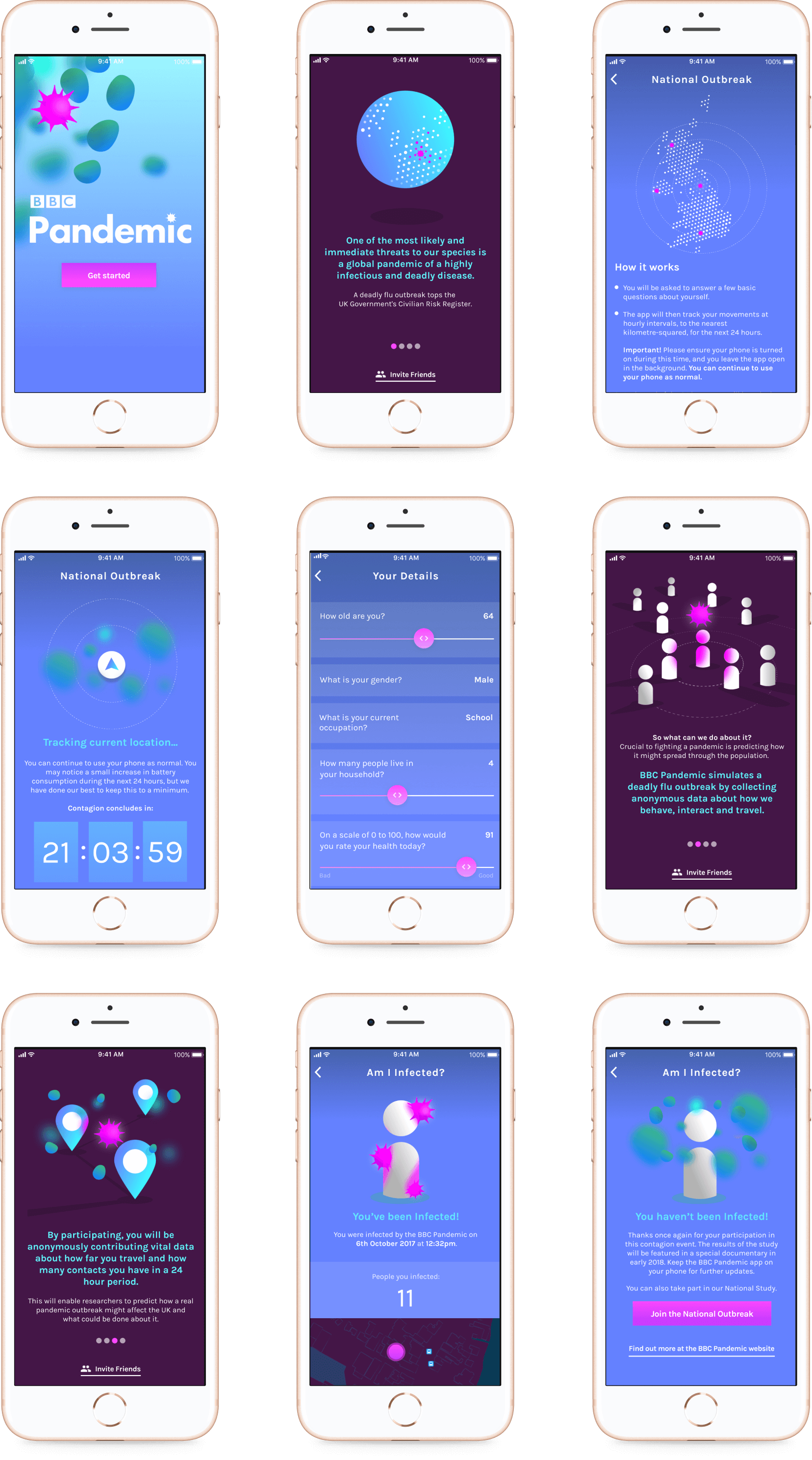 The UI for the app had to also be considered for both Android and iOS and although both were to be similar in style, nuances in header styles and interactions for both had to be considered and updated where necessary. 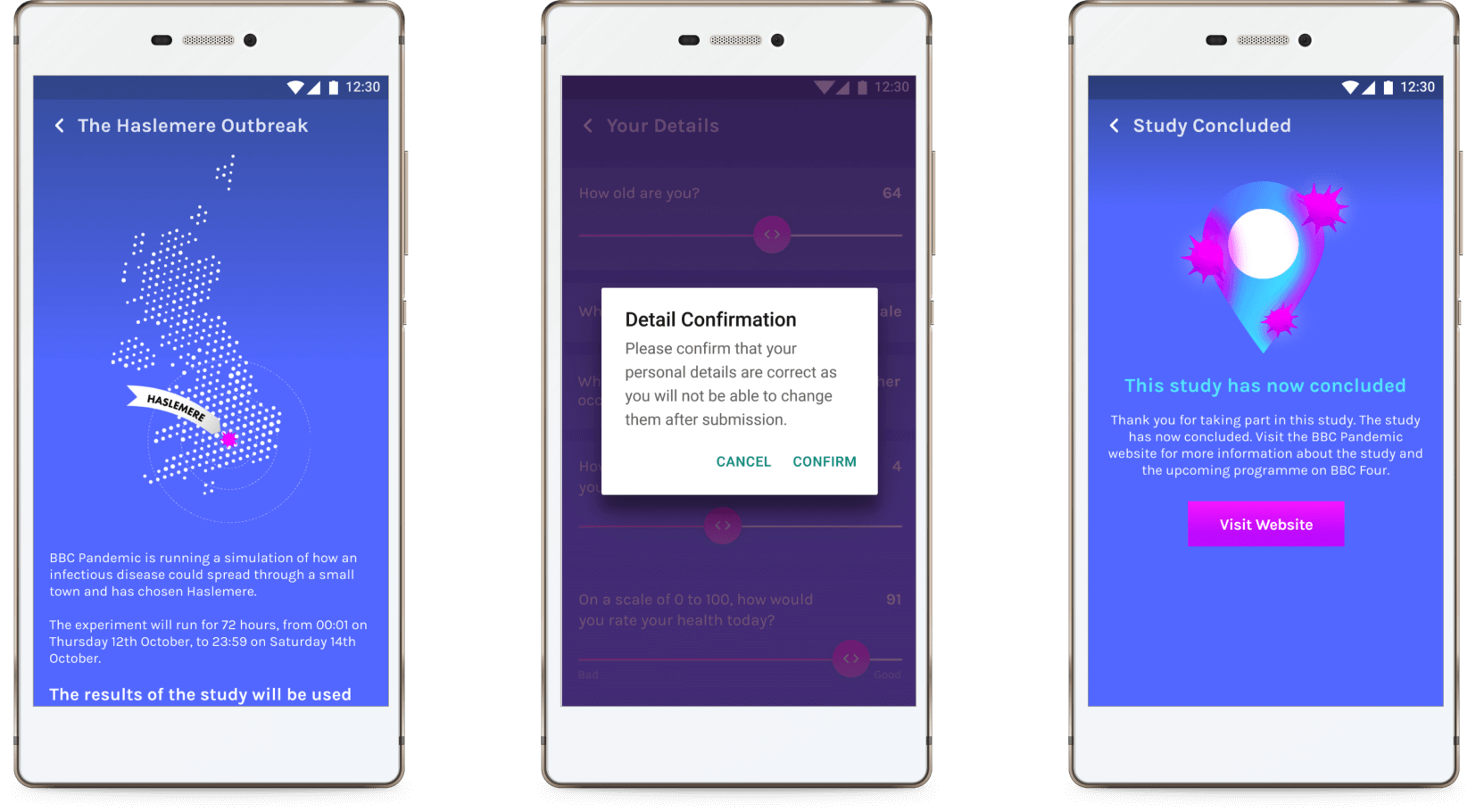 The app was also featured in The Guardian, The Telegraph, Huffington Post, The Irish News and The Daily Express, and was nominated as a finalist in the DANI awards and was named winner of ‘App of the Year’ at the Digital DNA awards. The application was also prominent throughout the BBC Four television show that provided viewers with the initial findings from the study.

Reflecting on the user experience of the application there are areas that could have been improved to have helped make the collection of data easier for users. It would also have been nice to have had more time to experiment with the final payoff for users in the way in which they find out whether they were infected or not. However with tight time restraints due to the filming schedule, the final application has been deemed successful in exceeding the expectations of our clients and has led to the collection of vital data and information that could be used in the future to help save lives in a flu pandemic.